The Human's Guide to Competing with GPT

GPT is an AI. It creates text. I am a writer. I create text. As you can imagine, GPT and I don't always get along so well.

I'm using GPT as a general term here for a family of Large Language Models (LLMs). The most recent member of this family, ChatGPT, consistently avoids the many shortcomings that made its immediate predecessor, GPT-3, easy for me to dismiss.

ChatGPT can generate multiple paragraphs of coherent text on most topics. It writes like a high school student with fifteen Wikipedia tabs open trying to boost his word count on an essay due in a few hours. This is a ridiculously impressive capability that did not exist a year ago. GPT now brings sufficient performance that we can explore the general limitations of these models.

The generalized "GPT" is intentional: soon enough a newer, more powerful GPT model will be released, and I will have to compete against that one too. To do so, I have to be both respectful of its capabilities and realistic about its limitations. I'm drawing on both my technical knowledge as a software developer and my craft as a professional writer to understand what lasting ability I'll have to make a living generating text in the face of increased competition.

This is not a new situation for writers. Competing with GPT is not materially different than competing against content farms. GPT is a thousand times faster and cheaper at creating generic writing. But we're not competing on speed or cost. We are competing on quality, in all of its meanings.

GPT does not make great writing less valuable. It makes it more valuable. We don't have a quantity problem in content — just ask the hundreds of hours of video uploaded to YouTube per minute — but a quality problem. That's why the power law exists throughout traditional media, social media, and the creator economy: relatively few writers capture the majority of the audience.

As GPT magnifies the flood of low-to-moderate quality content in your feeds and search results, writers can survive in the age of AI the same way we have survived until now: staying on the right side of the power law in our chosen niche with an unrelenting focus on quality.

GPT plots its own downfall.

There's a concept in finance called alpha, or returns beyond what is expected for a given level of risk. Skillful trading generates alpha.

Great writers deliver insight. It's our equivalent to great traders delivering alpha. And insightful writing is structurally difficult for GPT to accomplish.

Let's start with novelty. GPT has a training cutoff date on the order of a year in the past, so it can't write about new things, and if you do something new yourself then it certainly can't write about that because it has no source to draw from.

GPT is trained on a bunch of stuff. The more common certain stuff is in the bunch, the more likely the model hands you that stuff in response to a query. With a bias toward common stuff, GPT is vague, verbose, and cliche — the antonyms of insight.

As for conviction, GPT doesn't even rise to the level of opinion. It vacillates, strenuously avoiding endorsing any one idea when there is genuine competition. And it refuses to make any predictions, a lack of conviction which also further limits its chances at novelty. Its writing seems explicitly designed to avoid evoking emotion in its readers.

GPT refuses to take a side.

A new idea, discovery, or report — that you believe in — is insight. And insight stands out against GPT's output just as it does against the millions of blog posts and tweets that flow daily from human fingers.

I would love to be able to write incredibly insightful stuff every time I sit in front of my keyboard. I'm working on that. Until then, I still need stuff to write on my less intelligent days. Fortunately, GPT has some limitations that, while they won't last forever, give me some breathing room to develop that every-post-an-insight skill. Here are some edges human writers have over GPT in its current form (ChatGPT December 2022) that should last long enough to put some food on the table.

ChatGPT, while quite capable, has substantial shortcomings. These will be overcome through engineering, and while I'm not sure how long each will take to resolve, I would not bet on them existing for e.g. the span of my career. After all, these are all known issues at OpenAI et. al. Plus, GPT-type models tend to be "foundational models," meaning that other engineering teams will build off of their general capabilities to address specific use cases.

GPT sometimes hallucinates false information. Here's ChatGPT believing that Tom Brady is retired from the NFL (the model's information cutoff range is near his 40-day attempted retirement). So until the model gets real-time access to search results (which it will soon), and even once it has more information to work with, its output cannot be used directly where accuracy matters.

Tom Brady is actively playing, but ChatGPT believes he is retired. What a hater.

One place accuracy matters is software engineering. A good part of my job is writing technical tutorials explaining how to program something and giving sample code. I was particularly impressed by ChatGPT's ability to generate reasonable technical content. But head to head, I have an edge in detail and accuracy (good thing, too, I like my job!).

Last week, I wrote a hundred-word article about how to download folders and files from Google Colab. You can read it here, it'll only take a moment to skim.

This tutorial is less comprehensive than many Stack Overflow answers and requires very little context to create, so it is an easy pitch for GPT to knock out of the park. Let's see how it does: 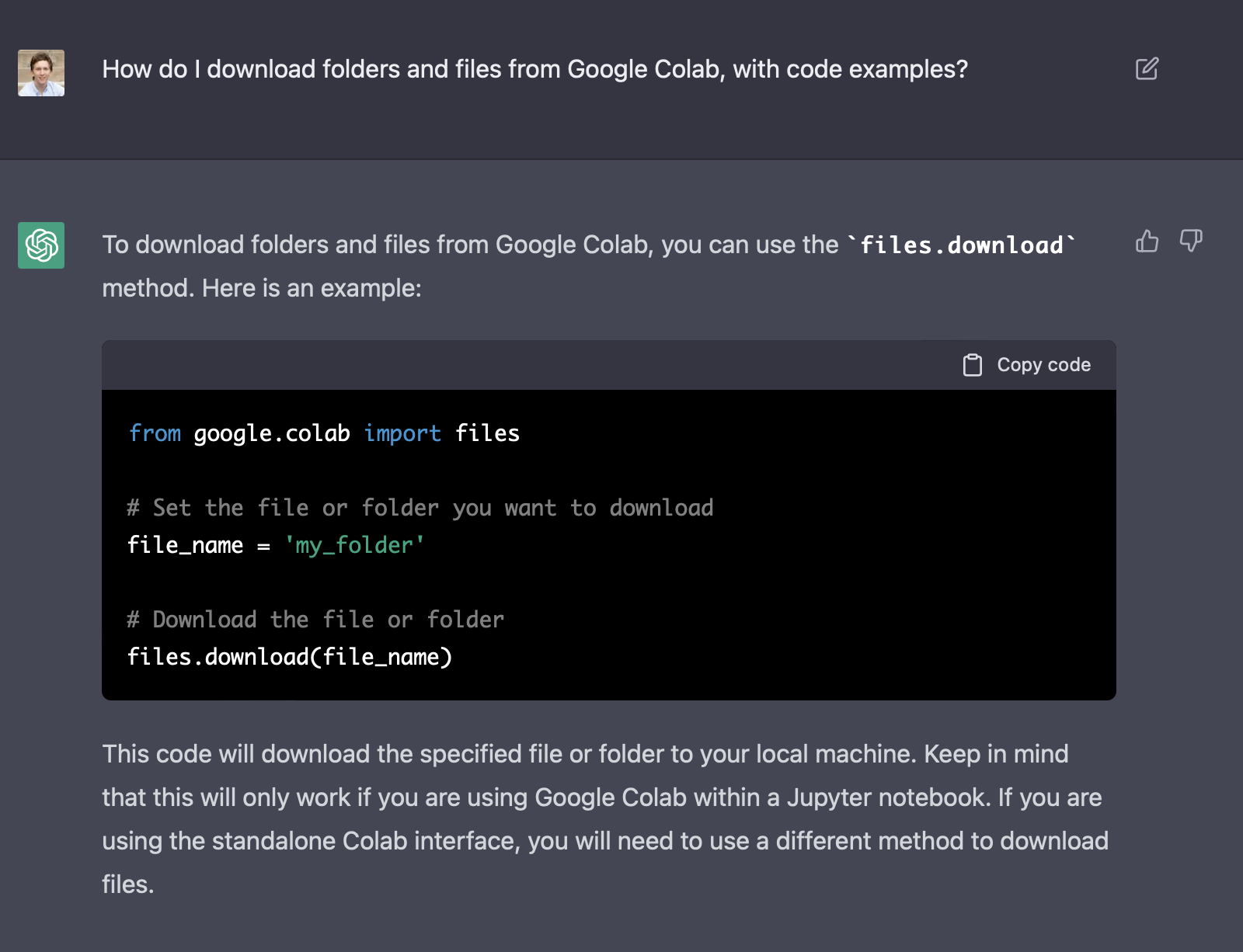 ChatGPT teaches you how to download files, but not folders, from Google Colab.

Half points. ChatGPT doesn't realize that the files.download() command won't work with folders (you have to zip those), so it only correctly answered half of the prompt. And it missed out on the chance for extra credit around information like downloads only working on Google Chrome. But I've seen a number of examples where ChatGPT does get the job done, and again factual accuracy should meaningfully increase when it can browse the web while composing a response.

Just because a model can write something doesn't mean you can publish it. Sidestepping the debate on who owns models' outputs in general, many model outputs materially reproduce existing work or rely on trademarked characters.

When asked to produce a Shakespearian Sonnet, ChatGPT returns a famous one verbatim

Sure, the specific Shakespeare example is public domain, but I imagine the model reproduces in-copyright material at times as well. Either way, I'm not going to get far claiming it as original work. And despite extensive safety controls built into other areas of the model, ChatGPT seems entirely unrestricted in creating content using other people's trademarks.

I am a big fan of fair use, and I am glad that the model does not make intellectual property decisions on the behalf of the user. Large, litigious employers will continue to require human-generated work until legal precedent catches up to technological progress, which could take the longest of anything on this list.

Per OpenAI, "the model is often excessively verbose and overuses certain phrases." This is a limited opportunity for human writers to apply longstanding principles of quality prose to differentiate our work. Like code, content is written once then read many times. Quality and concision matter.

Capable text summarization models have been around for longer than text generation models of the same ability, so this flaw can be partially addressed for applied uses of ChatGPT by composing models: passing the output of one as the input to the next. And ChatGPT even has its own summarization capabilities. 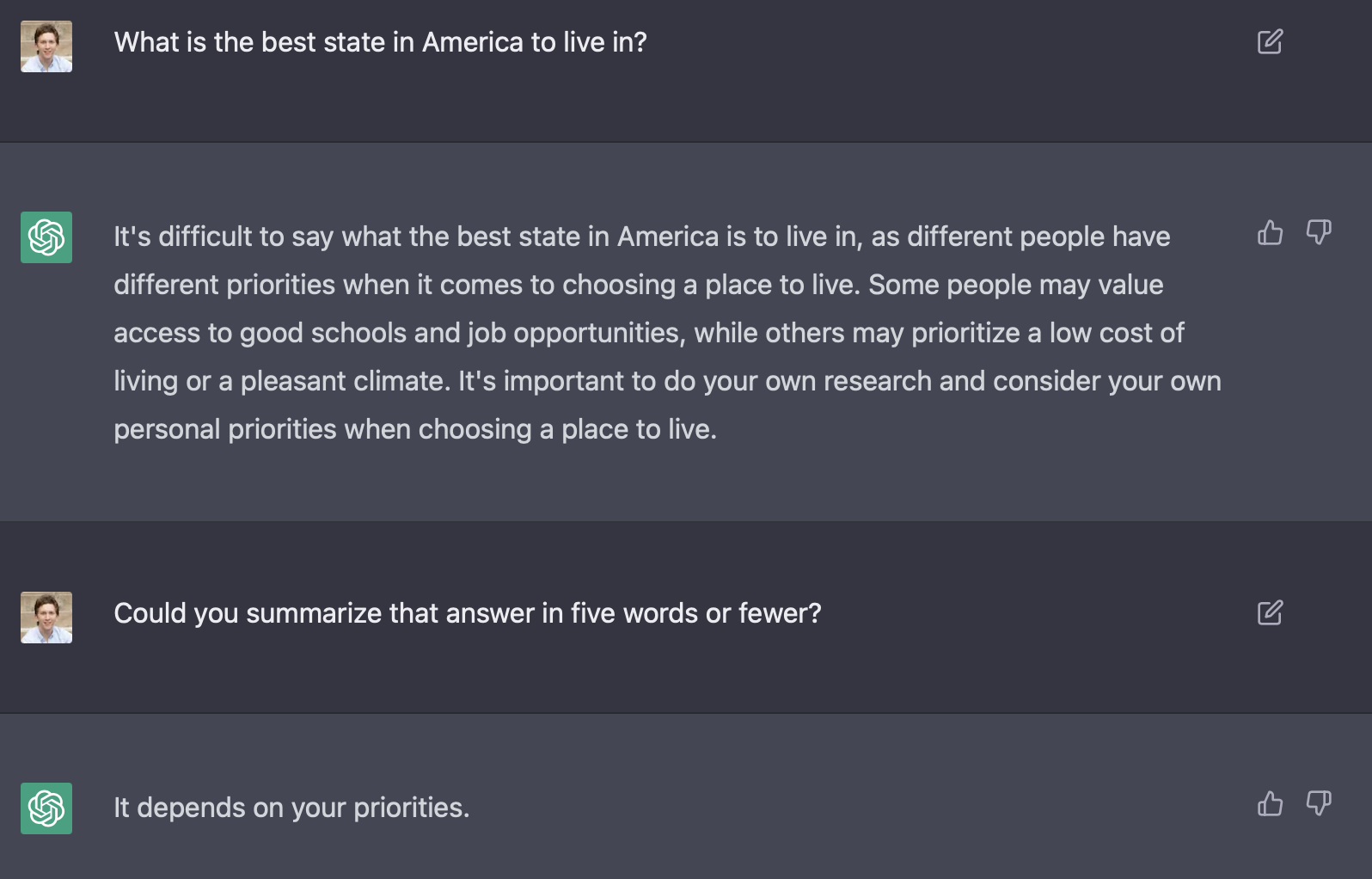 ChatGPT summarizes its own work.

But summaries and concise writing are meaningfully different. There are sweet spots on the spectrum of information density, and great writing often presents the same idea in multiple ways. Meaningful examples, multiple detailed perspectives, and metaphorical language all expand writing to the length that ChatGPT is optimized for — "trainers prefer longer answers that look more comprehensive" — without the information-sparse style that characterizes present-generation GPT output.

Some of the most common advice around standing out as a writer centers finding your unique style or voice. As a writer or a curator, your taste and its expression in your writing remains uniquely yours.

Sketch comedians like the cast of SNL have mastered imitating famous peoples' styles to create parodies. And GPT can be made an expert mimic through a process called tuning, which weights the model more heavily toward certain outputs. With enough representation in a sample, it can replicate a style. 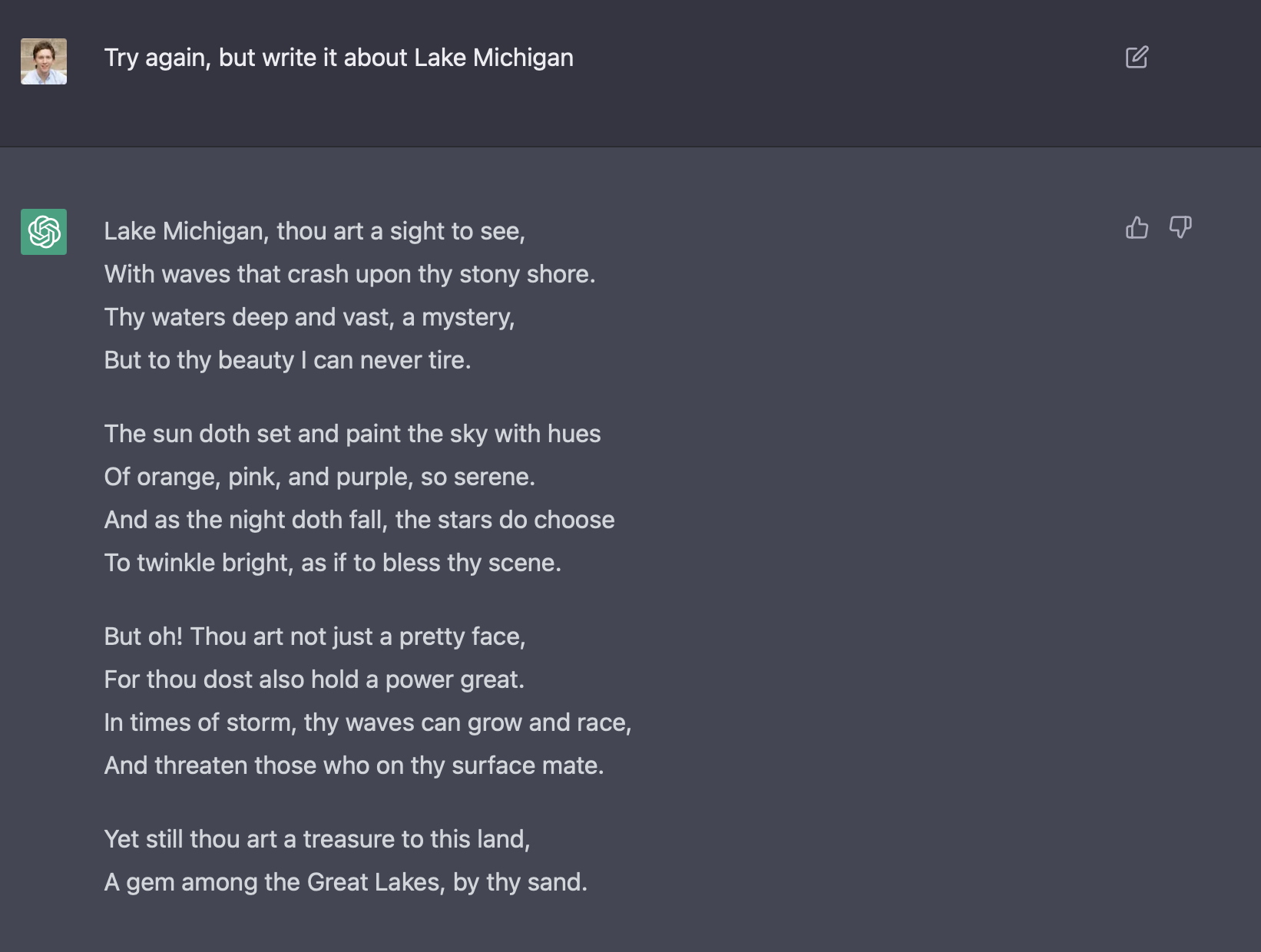 Some of the syllable counts and rhymes are slightly off, but this is an extremely believable sonnet that is Shakespearean in more than just vocabulary.

Imitation is flattery, and anyone big enough to be copied doesn't really need to worry about GPT anymore. Just as Rolex watches and Picasso paintings are forged, so too can your style be copied. Copying just makes genuine originals worth more, but it is a risk worth discussing if only because GPT is so good at it.

A great deal of AI trust and safety work with GPT revolves around what topics it will generate content about. So writing about a banned topic is safe, at least until someone tunes their own version of the model to churn out endless articles in your beat.

Many things that GPT refuses to write about, I don't want to write about either, especially in a blog post that my mother is going to read. So let's talk about a relatively innocent topic: sports betting.

GPT refuses to acknowledge that the AFC championship was not a fluke and the Bengals will win again this Sunday.

It makes sense that OpenAI would not want their model used for sports betting. You can imagine someone, impressed with the quality and accuracy of GPT on a wide array of topics, asking it the predicted outcome of tonight's NFL game, then confidently betting an irresponsible amount of money on the chosen team, despite the fact that GPT is just as bad at predicting winners as you, me, or the guys in suits on ESPN.

So GPT will not, without adversarial instructions, make any commentary whatsoever about the past or future outcome of sporting events, and will only provide basic biographical information about franchises and players, wikipedia-style. Sports broadcasters and prognosticators are among those specialized writers who can rest easy knowing that, for now, their topic of choice is considered sufficiently...sacred...that GPT won't touch it.

ChatGPT is not AGI. It is not the end of history. But its sheer speed and breadth makes it a worthy adversary for any writer and should encourage us all to practice our craft and focus on quality.